We were surprised to see Google searches asking ‘are cocktails just for girls?’ and ‘manly drinks’ and so launched a survey on the genderization of cocktails, asking the public questions about their individual cocktail preferences to see if each gender played out their stereotype. The results are surprising!

Our survey revealed that a gender booze binary persists in today’s culture, with 87% of all respondents agreeing there is still a visible gender divide in the way alcoholic drinks are marketed and sold. This plays out particularly in cocktail drinking, with sweet, fruity, brightly coloured, prettily-garnished drinks being positioned as feminine or ‘girly’, and savory, sour, spicy, strong drinks advertised as masculine or ‘manly’.

What’s more, drinking cocktails is largely considered to be a female activity – with the majority of our respondents (over 75%) assuming that women consume the most amount of cocktails. Read on to discover more: 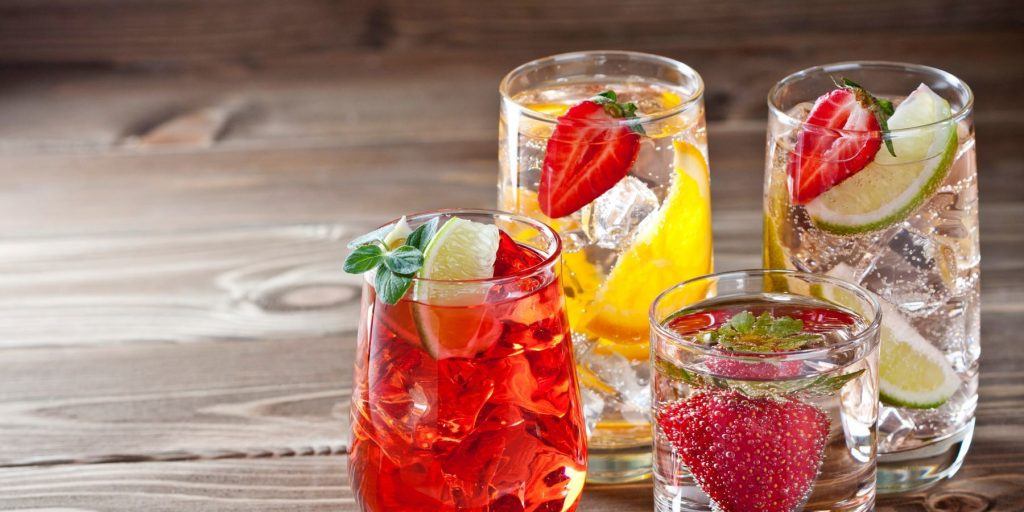 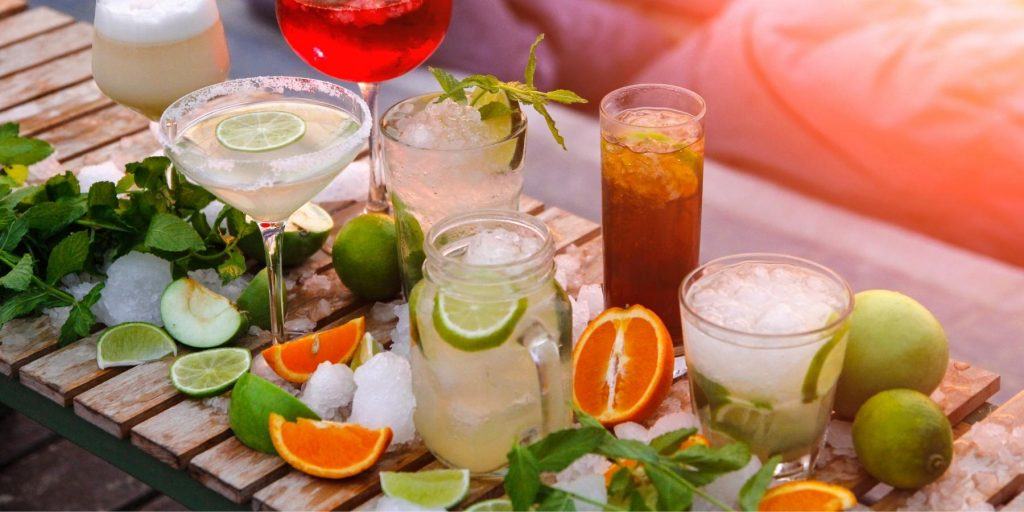 The majority of men prefer stronger cocktails (55%), whereas more women choose lighter, refreshing drinks (50%) and are more likely to go for a mocktail (16%).

Cocktail color: The rules of attraction 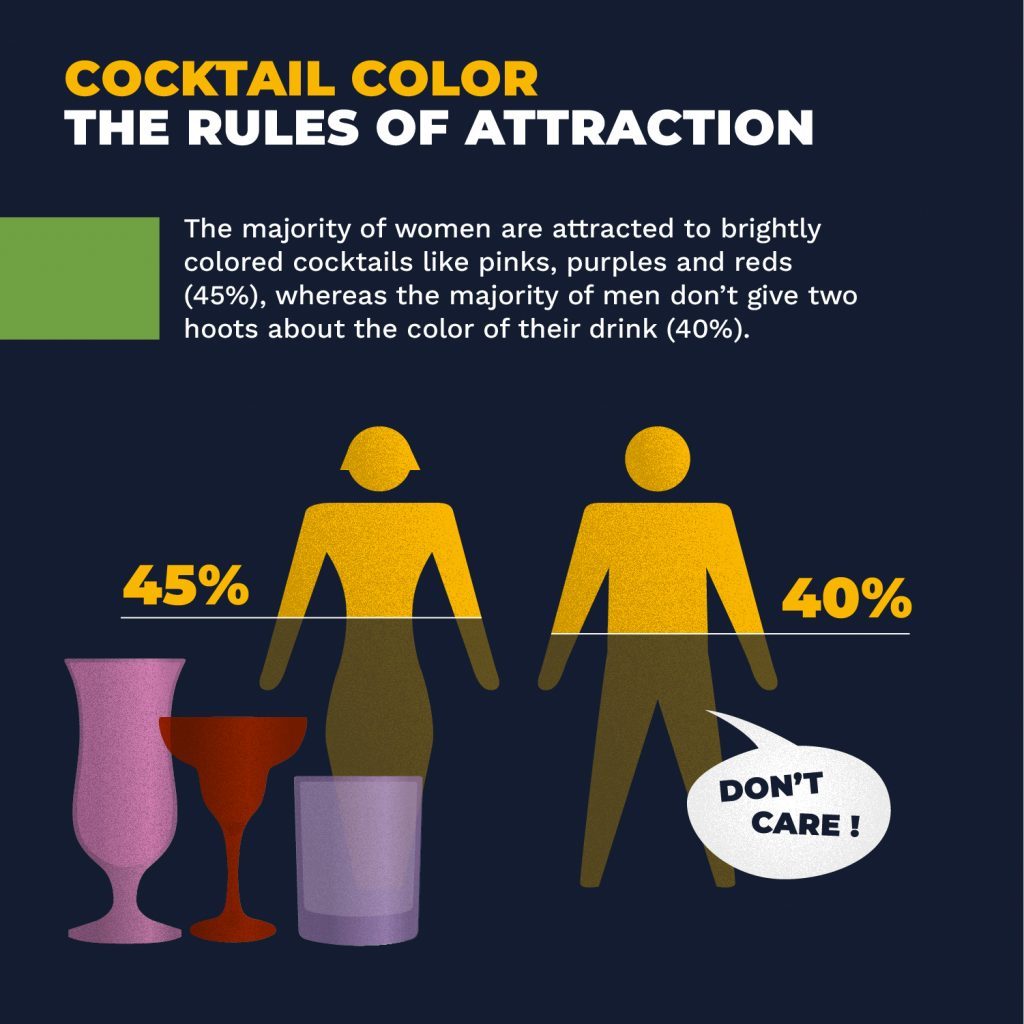 The majority of women are attracted to brightly colored cocktails like pinks, purples and reds (45%), whereas the majority of men don’t give two hoots about the color of their drink (40%). 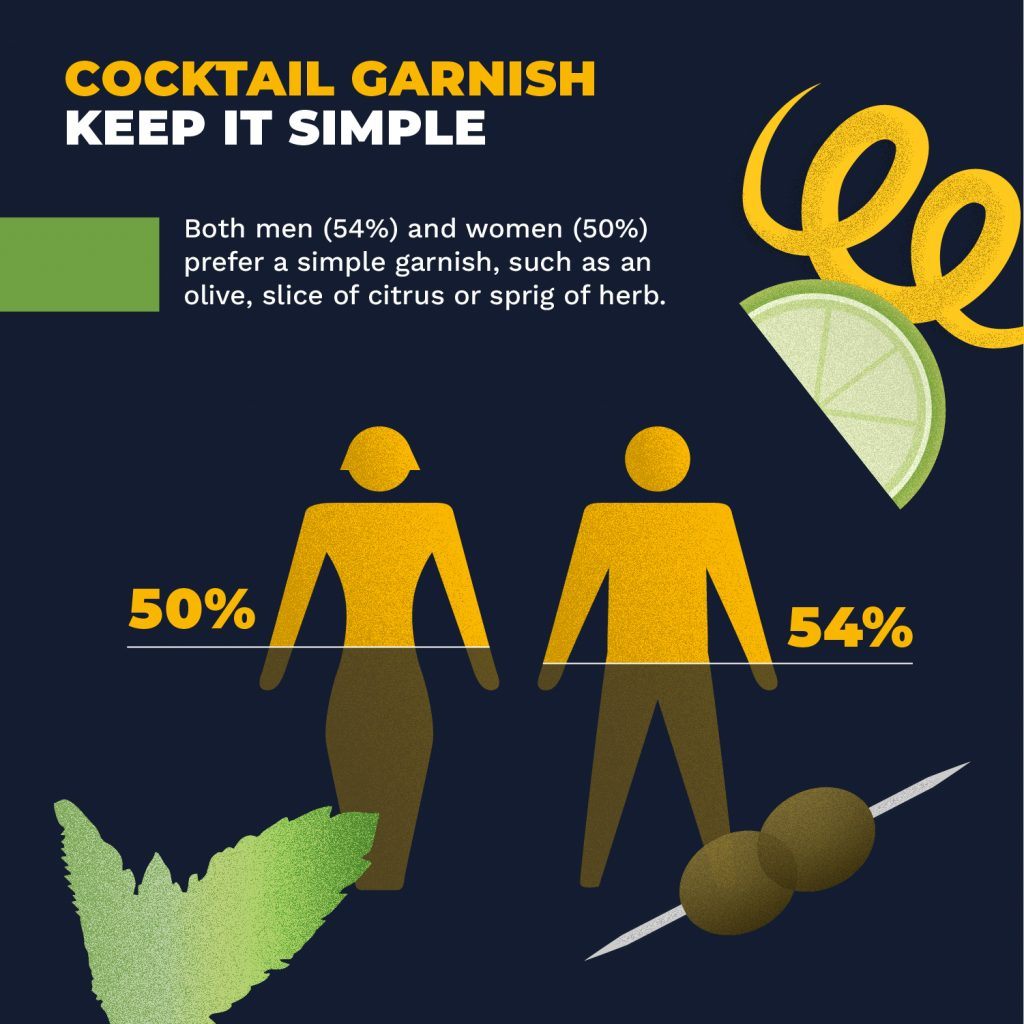 Both men (54%) and women (50%) prefer a simple garnish, such as an olive, slice of citrus or sprig of herb, over a bells-and-whistles extravagant garnish, or no garnish at all. 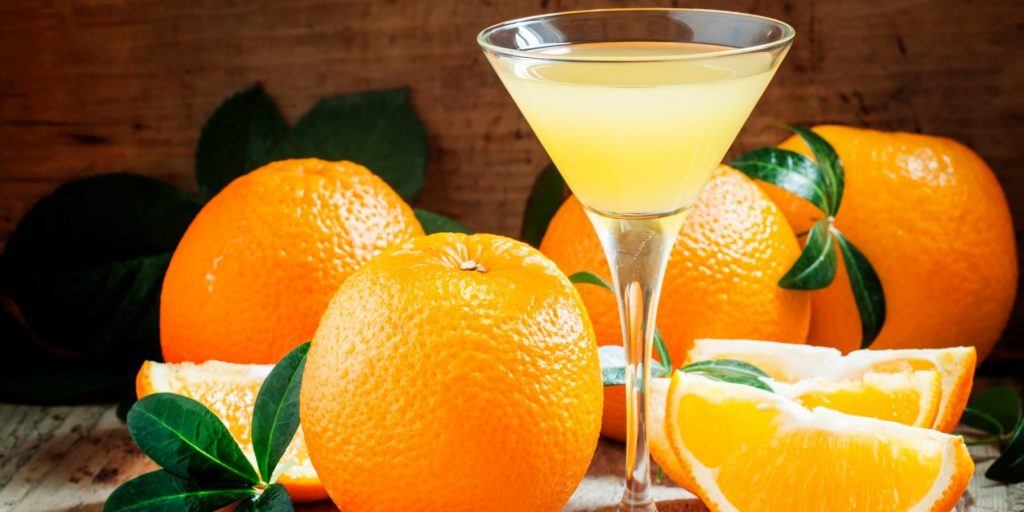 Both men (37%) and women (26%) prefer fun and flirty names such as French Kiss and Hanky Panky, over classy, sophisticated names such as Sidecar and Dark & Stormy.

Cocktail spirit base: Here’s looking at you, vodka 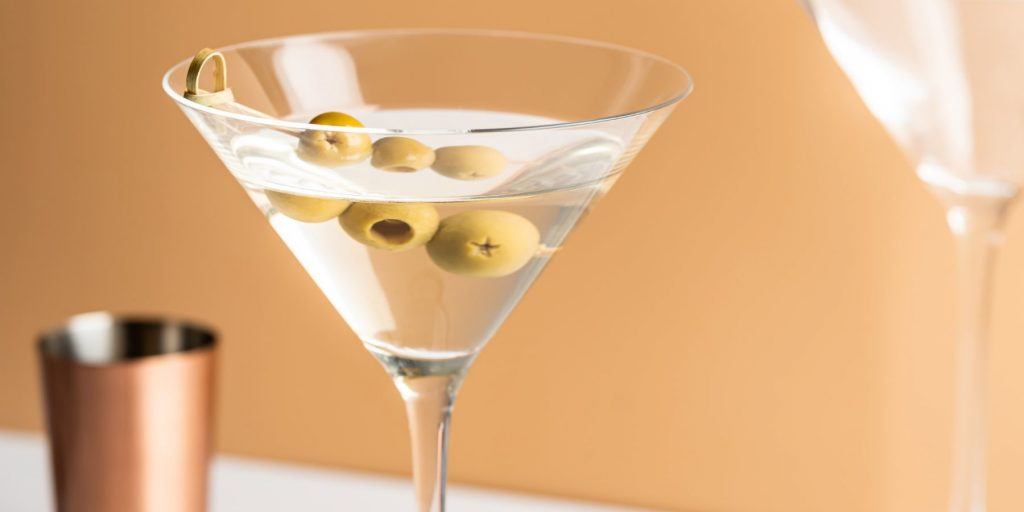 Of all the spirits, vodka is a clear winner for both genders, with 29% men and 30% women choosing it over other bases such as gin, rum, whiskey, tequila and brandy.

Drinking neat spirits: Give it to me straight Preferred cocktail glass: Judging a cocktail by its vessel From a long list of options, the favorite cocktail glass amongst men is the squat, cylindrical lowball or rocks glass (28%), whereas women prefer the curvy, fluted hurricane glass (19%). The Margarita is a clear winner for both men and women when asked their preferred cocktail to make at home, with rum and coke coming close second across both genders. In addition, the Pina Colada and Sex On The Beach scores highly on the womens’ list, and the Screwdriver and Bloody Mary are runners-up for the men.

Favorite Place To Drink Cocktails: Wherever You May Go 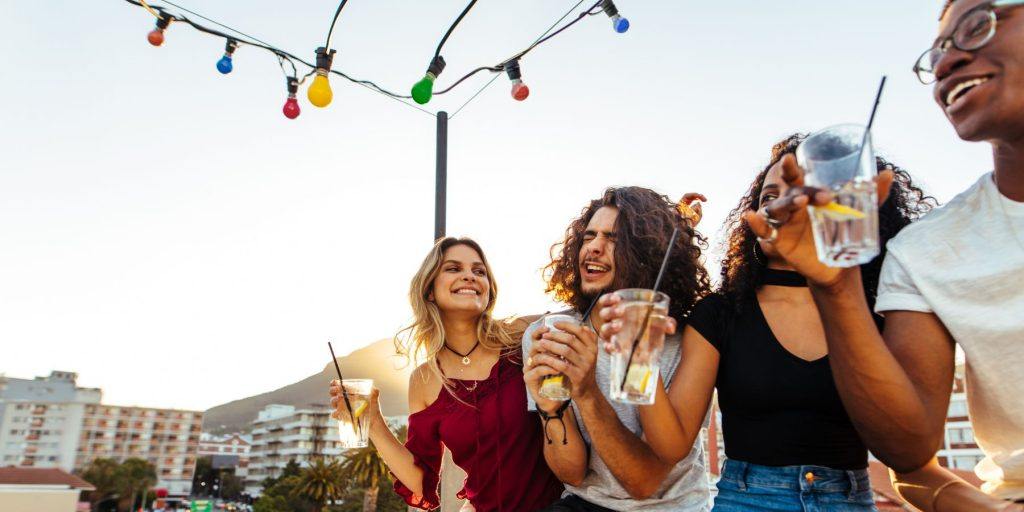 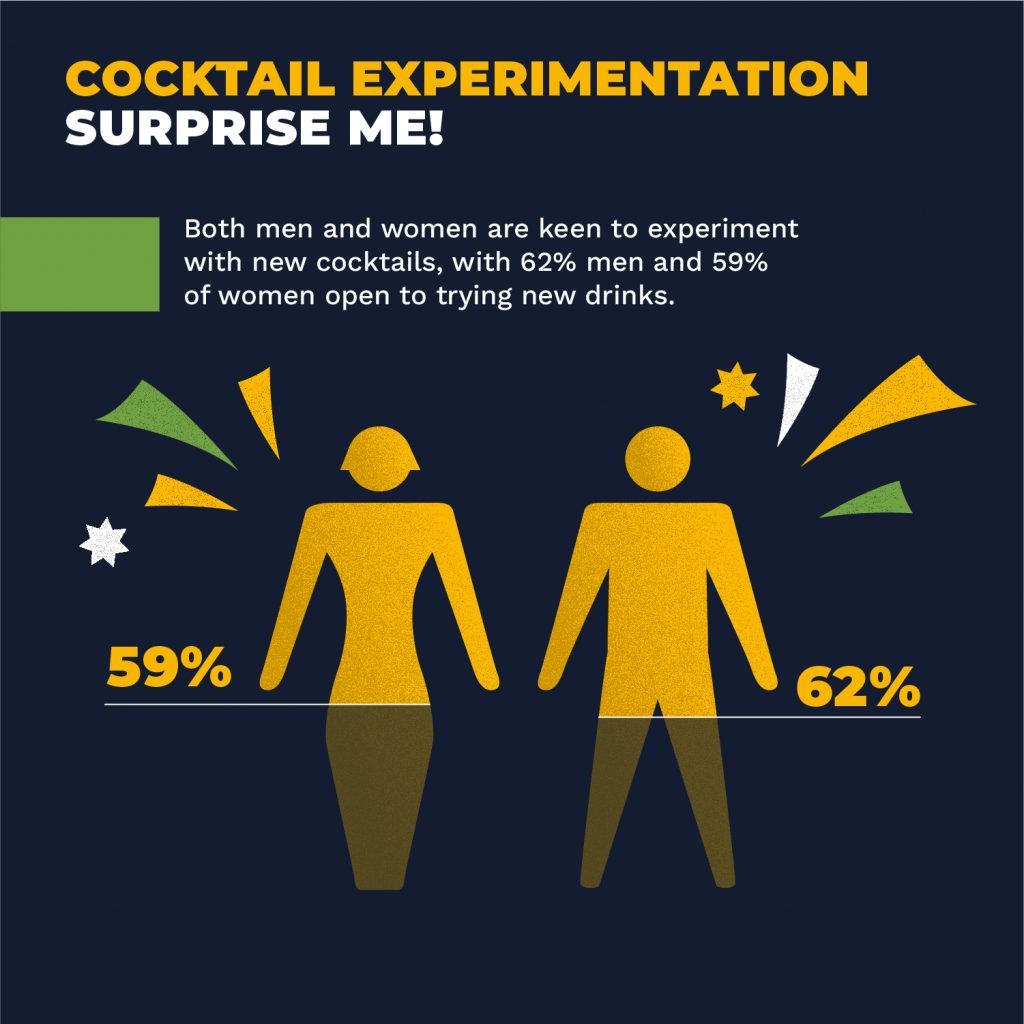 Both men and women are keen to experiment with new cocktails, with 62% men and 59% of women open to trying new drinks.

Self-consciousness: Stare all you want

It was pleasing to see that the majority of both men and women are uninhibited about ordering flamboyant, decorated cocktails such as Unicorn Kiss or Sex on the Beach, with 59% of men and 72% of women claiming they are not at all self-conscious.

7 Easy Scotch Cocktails to Make at Your Next Shindig

Stay in the mix

How to Make a Cadillac Margarita with Grand Marnier

How to Make a Celebration-Ready Strawberry Mimosa at Home

The best kind of Irish cocktails are a lot like limericks – quirky, amusing, and lots of fun to share with family and friends. To set the scene for a festive St Patrick’s Day, beautiful Bealtaine (May Day), and all sorts of craic-infused DIY get-togethers, we rounded up a selection of 14 cocktails with plenty […]

7 Easy Scotch Cocktails to Make at Your Next Shindig

Gather round wee lassies and laddies, because we’re off to the land that invented the nectar of the gods! That’s right, it’s time for a Scotch cocktail adventure, so throw on your best tartan, grab a walking stick and let’s hit the road.    1. Scotch Old Fashioned The Old Fashioned is not only a delicious […]